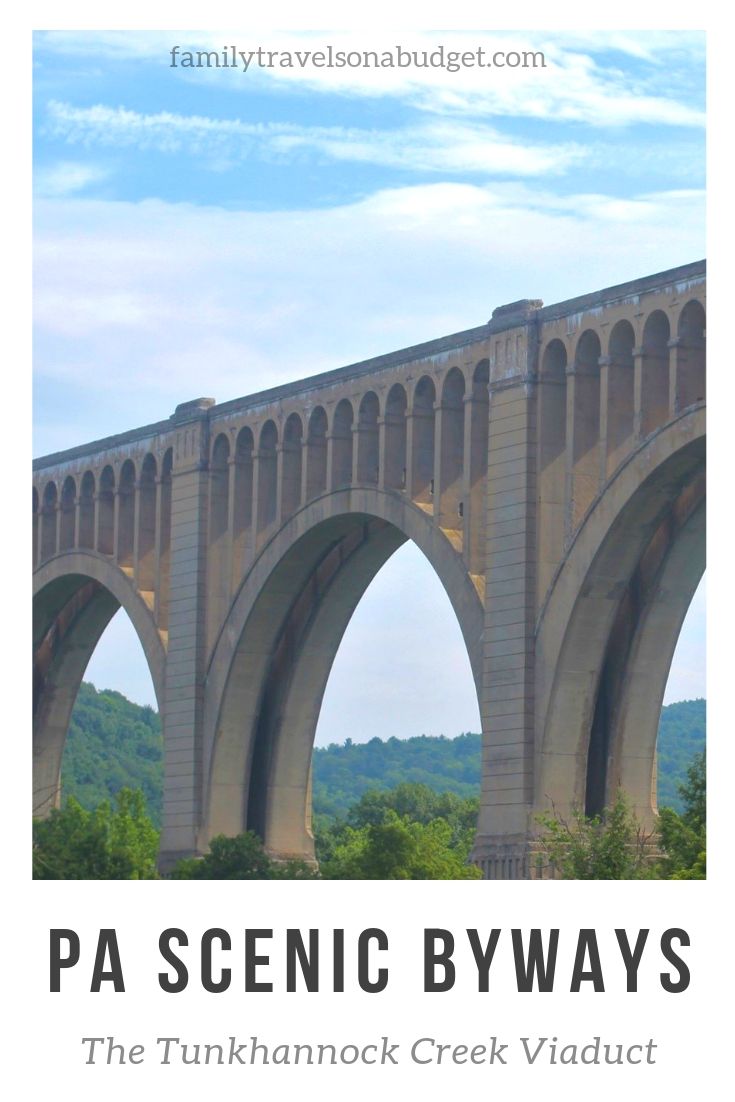 When I was in Pennsylvania this summer, my son, Ben, got to join me for a day. He was working at a summer camp not too far away, and coordinated his day off to go with my trip. As my kids grow up, seeing them less often is bittersweet. This story falls on the side of sweet.

Ben got to my hotel about 9 p.m. after working all day. We got junk food, turned on ESPN to play in the background and got caught up — him telling me fun stories of his summer adventures, and me filling him in on what I’d seen so far in Pennsylvania.

The camp he worked at takes the kids on trips throughout the Pennsylvania Endless Mountains and the New York Adirondacks. He had driven the same roads I was traveling. He asked if I’d seen all the beautiful, orange flowers along the side of the road. He meant daylilies, something I’d grown up with in Ohio, but don’t see often in North Carolina. I told him how my mom had grown them behind our garage and of the memories they brought back. 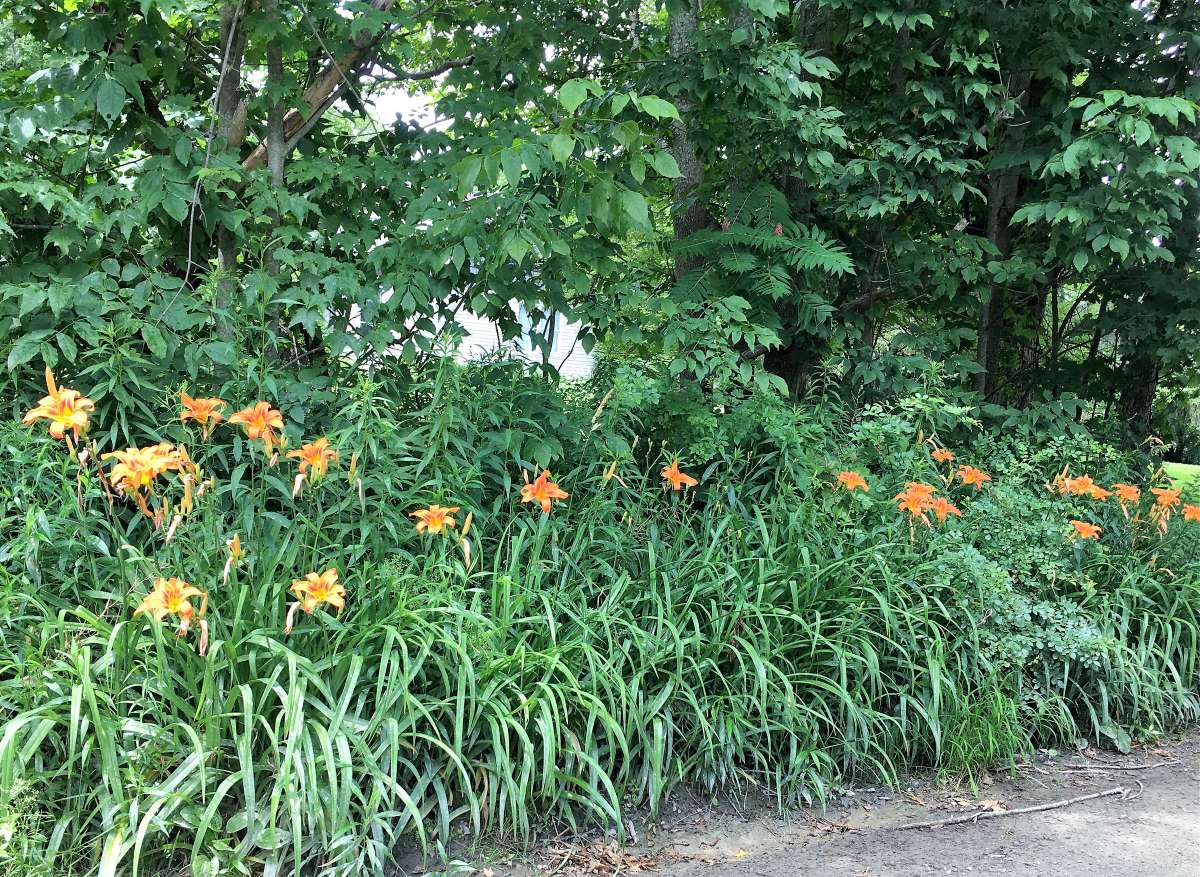 Then he asked if I’d seen the big bridge. I replied that I had not.

Ben insisted that I need to find it. He clarified, “Well, really, you just need to find the road it’s on.” He told me I can’t miss the bridge. It just pops up out of nowhere after you go around a curve. He said that even knowing where it is, he is awed every time.

For him to get so excited about a bridge…

I pulled out my itinerary, knowing I had a bridge to see. I asked him, “Are you talking about the Tunkhannock Viaduct?”

In typical kid fashion, he had no idea what it’s called, and added, “You’ll know if it’s the same one when you see it.”

The next day, we explored the town of Tunkhannock, took a kayak tour on the Susquehanna River and visited the butterfly house at Creekside Gardens. He headed back to camp. I packed up to hit the road for the next day’s adventure… and the Tunkhannock Creek Viaduct. 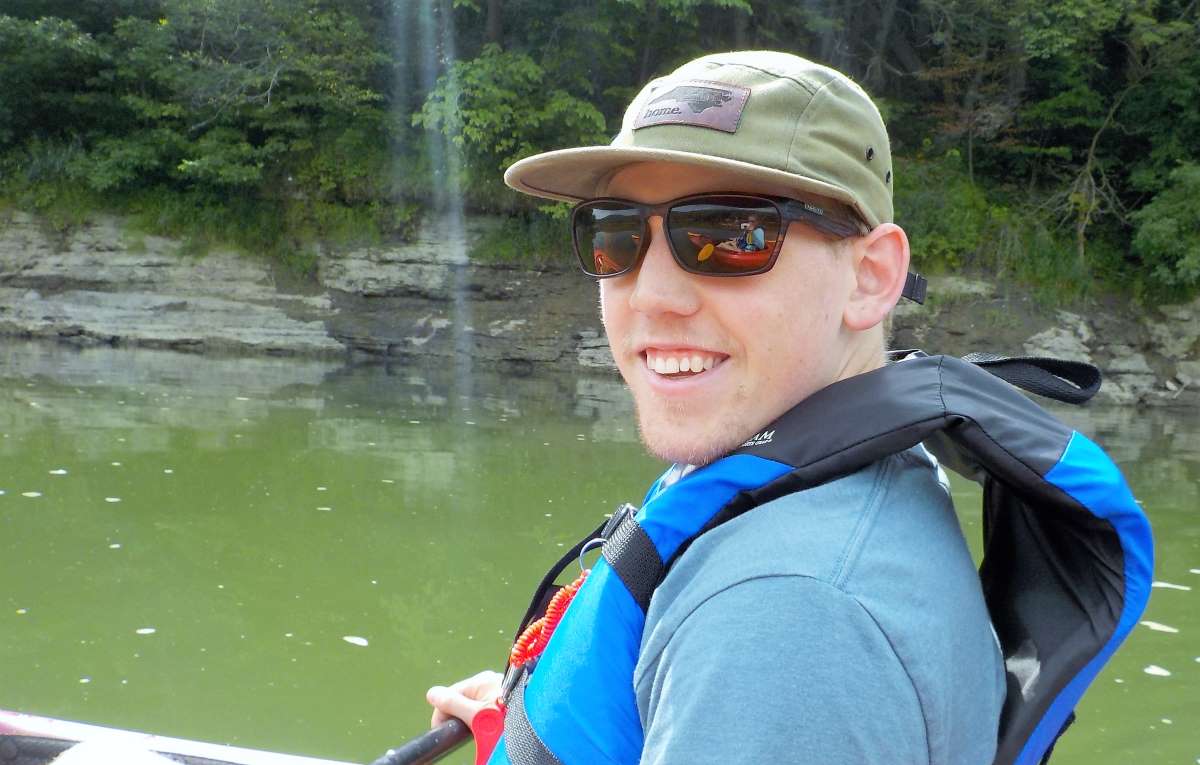 On a hosted trip to the Endless Mountains of Northeastern Pennsylvania, I got to spend a day with my son.

In the Endless Mountains of Northeastern Pennsylvania, you  can drive I-81, aka Interstate 81, and bypass the small towns and places along the way. OR, you can get off the interstate in New Milton or Scranton and drive Route 6 and Route 11 to experience one of the best of Pennsylvania’s scenic byways. It might add a little time to your drive, but not a whole lot. AND, you won’t see the railroad viaduct — or the daylilies — from the interstate! So, go! 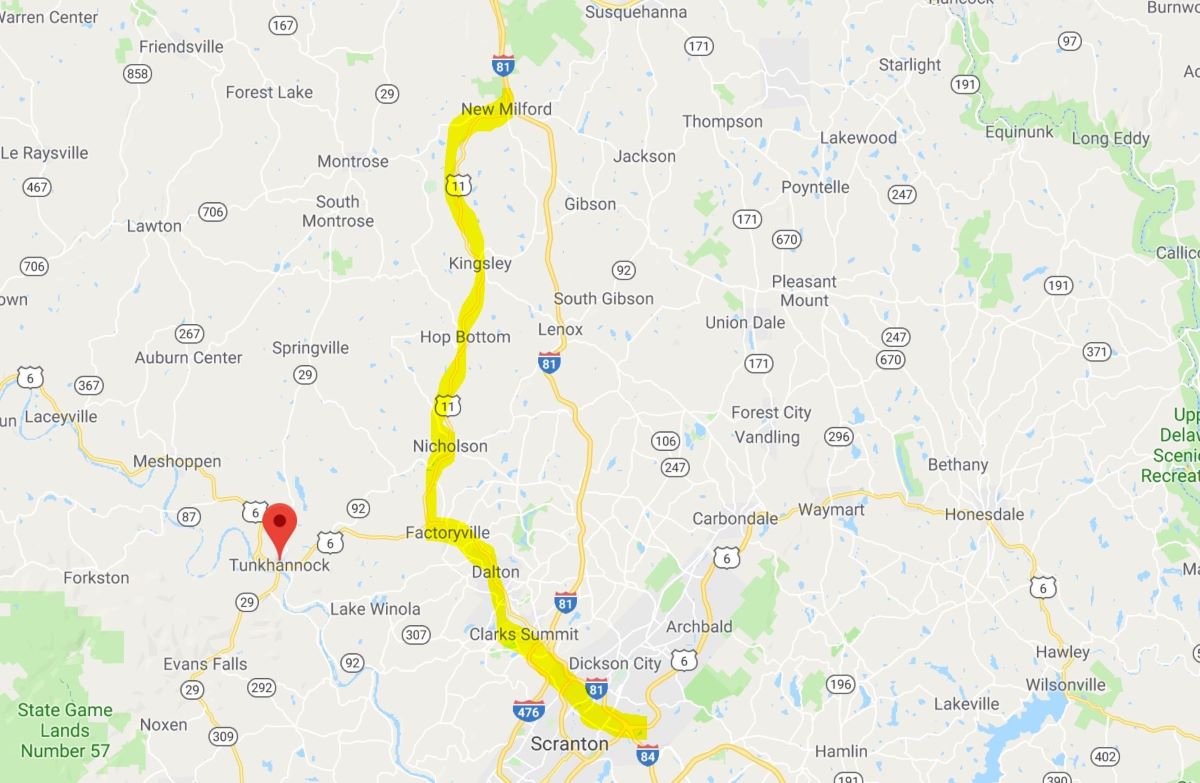 The Tunkhannock Viaduct was built by the DL&W Railroad between the years of 1912 and 1915. If you aren’t a big history buff, that is before power equipment like the cranes used to build major structures today. In fact, it took more than 500 men working 24 hours a day for three years to construct the bridge. They used steam shovels, good old fashioned dynamite, a cement mixer… and their hands — raw strength. 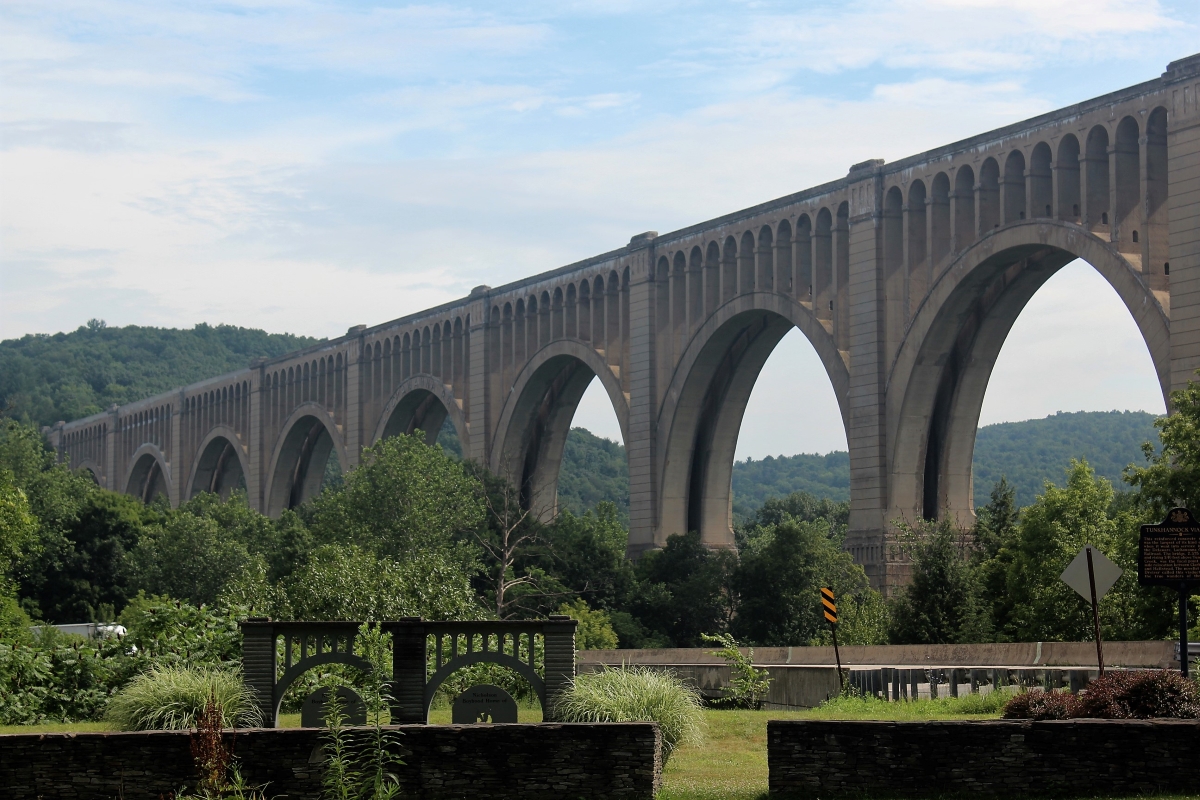 The Tunkhannock Creek Viaduct project was a streamlining effort for the DL&W Railroad, cutting off about 3.6 miles from the main rail line from Scranton, PA to Binghampton, NY. More importantly, the railroad viaduct eliminated steep grades which had required pusher engines to scale steep grades, track that curved through the mountains and public railroad crossings.

The bridge, which spans the valley at Tunkhannock Creek, simplified things for the railroad making it easier to carry goods and passengers more safely, more quickly and more economically. And, it’s still in use today!

You might hear it called the Nicholson Bridge, named for the town it overlooks. Whatever you call it, the railroad viaduct is worth a detour!

The Tunkhannock Creek Viaduct is 2,375 feet long (almost 1/2 a mile). It stands 240 feet tall (300 feet if you count the underground portion built on bedrock). And, it is 34 feet wide. That’s a lot of steel and concrete!

Those stats are really impressive, enough to qualify it for the National Register of Historic Places. But, when you see it in person, remember it was built by hand. Not by machine!

The concrete was mixed, guided and poured — by hand. The steel moved, placed and welded — by hand. The holes (60 feet deep) — okay, those were dug with dynamite — until they hit quicksand that had to be dug. By hand. I cannot imagine how hard this work must have been!

The bridge was such a masterpiece, comprised of 12 arches. Ten, symmetrical arches measure 180 feet across and the two on each end (not visible through foliage) measure 100 feet across and anchor the bridge into the mountain on either side. When complete, the Tunkhannock Creek railroad viaduct was such a masterpiece that it drew famous visitors like President Theodore Roosevelt, Henry Ford, and Thomas Edison. It is considered one of the enduring engineering masterpieces of the world. 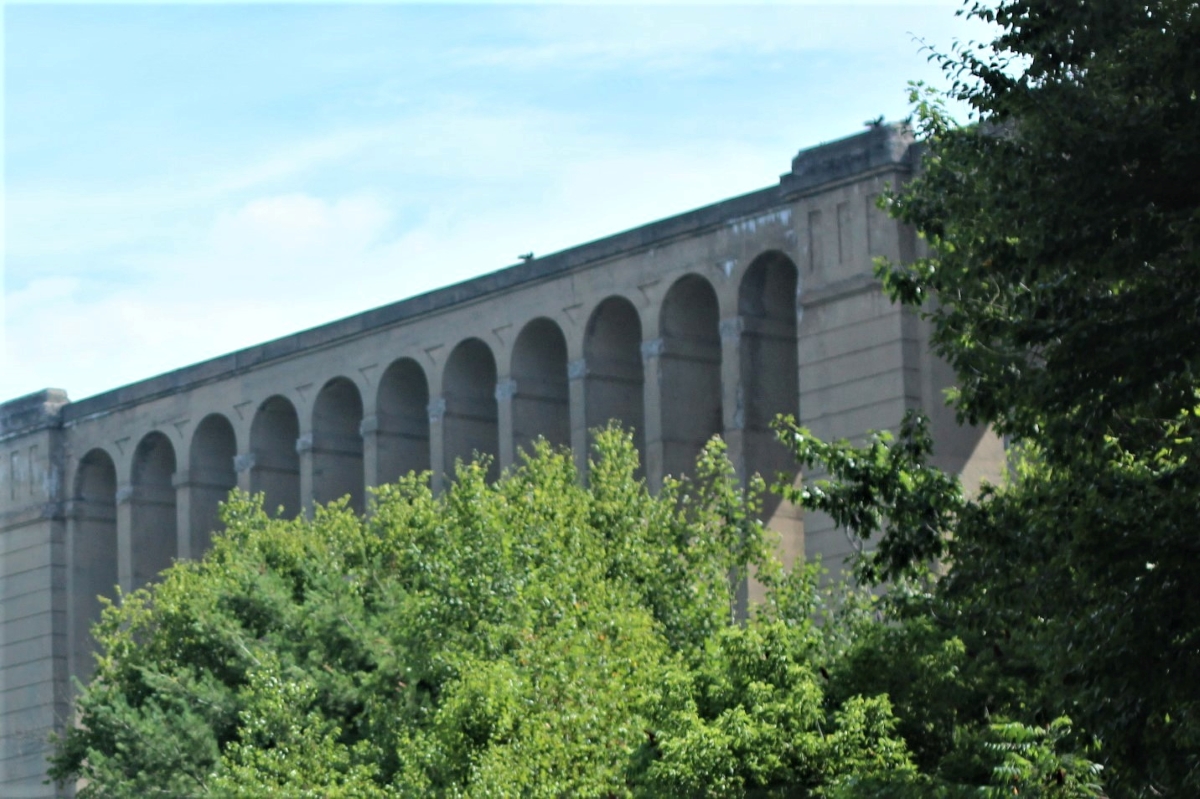 Where is the Tunkhannock Creek Viaduct?

Hopefully, I’ve convinced you to visit the historic Tunkhannock Creek Viaduct for yourself!

The spectacular view that caught my son’s attention can be seen from Route 11.  The Tunkhannock Viaduct is in the community of Nicholson, about 30 minutes northwest of downtown Scranton and 20 minutes northeast of Tunkhannock. To find it, set your GPS to take you to Nicholson, PA, or use the following coordinates: 41.625483, -75.778474.

On Route 11, use the roadside pull off to get a good look of the railroad viaduct.

There’s another vantage point worth seeing on Route 92, just east of town. You can pull off the road UNDER the Nicholson Bridge to see the railroad viaduct from below. Looking up, it’s even harder to imagine how challenging construction must have been. 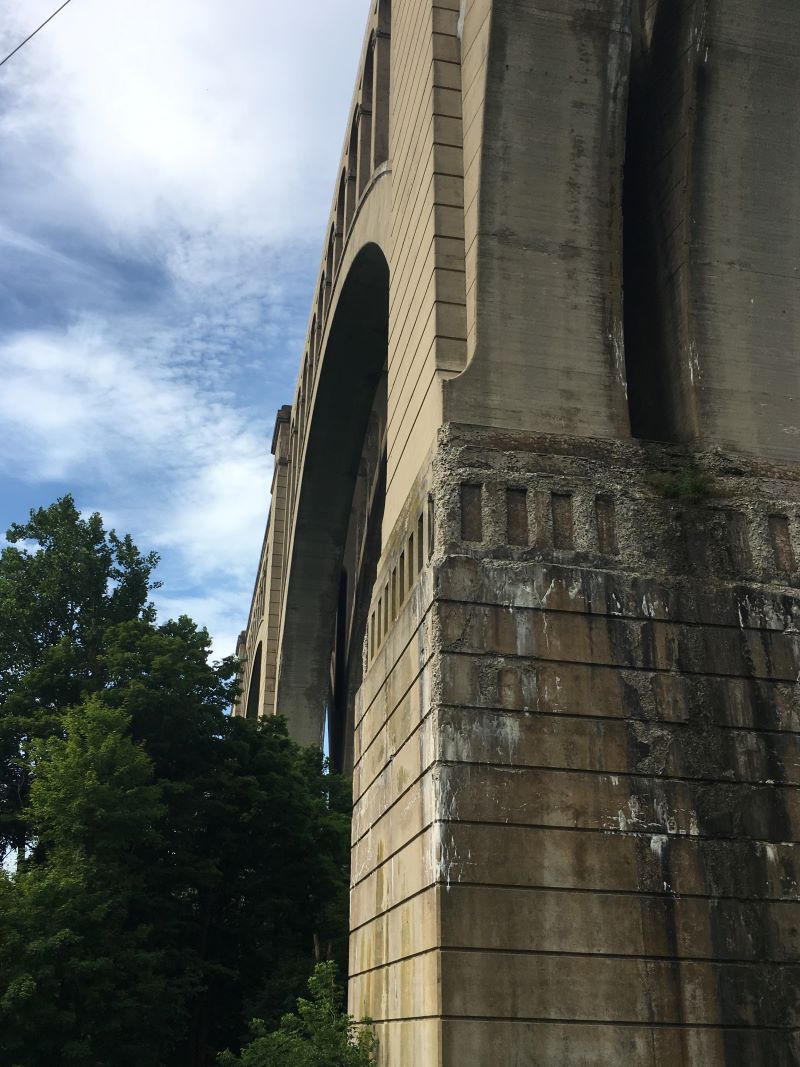 Information boards at both locations tell you more about the cost and construction details of this architectural wonder. So, take Pennsylvania’s scenic routes to see the Tunkhannock Creek Viaduct, an active remnant of the American Industrial Revolution still in use today.

Discover more about the Tunkhannock Viaduct

Discover the Tunkhannock Creek Viaduct and other amazing places around the world and follow our adventures on Instagram! I share finds wherever I go and would love to chat with you there!

Pin this image for later so you don’t forget to visit this stunning piece of architecture in the Endless Mountains!

To learn more about the Endless Mountains of Northeastern Pennsylvania, visit the tourism bureau website. And tell them I say hi!