Lancaster County, Pennsylvania is well known for its connection to the Amish community. People come by the bus load to see the large, plain homes on massive farms with plain blue and gray clothes hanging on clotheslines and buggies pulled by horses. Others come for the down-home Amish cooking (me, too!)

If you go back in time just a little further, you’ll discover the German origin of this community.

So, true confession… I remember absolutely nothing about my high school world history class. To be honest, I don’t even know who the teacher was! Maybe I didn’t take world history? Who knows?

As you might guess, I never liked history — boring textbook facts and figures just didn’t do it for me.

But, when I homeschooled my boys, history came to life. For all of us. I discovered my own passion for it, and I think it caught on with the kids. We studied differently, reading historical novels, visiting places and watching movies that brought history to life. It worked. They certainly remember a lot of it!

So, when I got to the Hans Herr House, an incredible display of medieval German architecture in the heart of Pennsylvania, I was thrilled that our tour began with a brief (not boring) history lesson. Even better, it was stuff I already knew — just put into context in this place! Awesome!

How the Hans Herr family came to Pennsylvania

Way back in the 1500s, Martin Luther and Ulrich Zwingli were busy modernizing the Christianity. Luther’s focus led to the Protestant ideas we have today. Zwingli focused more on Catholic reform. Neither was well-received by all.

Zwingli’s efforts in Zurich made life difficult for the Anabaptists (early Protestants, particularly the Mennonites) who lived there. They had to leave Switzerland for their safety. But where would they go?

About that same time, Germany’s economy was destroyed by the 30 Year’s War. Germany needed farmers. The Mennonites needed a home.

They moved to Germany, learned practical German architecture building techniques, and lived peacefully in their adopted homeland. This worked well until new rulers came into power and wanted the Mennonites to fight to conquer neighboring lands.

In 1681, William Penn started the “Holy Experiment,” the idea that peaceful religions could coexist if left alone. He explained,

For you are now fixed at the mercy of no governor that comes to make his fortune great; you shall be governed by laws of your own making and live a free, and if you will, a sober and industrious life. I shall not usurp the right of any… (William Penn)

Also, Penn was a fair man, and respected the Native Americans who first lived there even as he developed the territory. The Holy Experiment worked well for about 80 years. His sons did not share his lofty ideals and basically ruined the whole thing.

The Herr family heard about the wonderful opportunity in Pennsylvania. They traveled to London in 1710 and lived as refugees until a ship was available to carry them to America. They arrived in Philadelphia in September of 1710 and wintered there before settling in Lancaster County the following spring.

At that time, Lancaster County was heavily wooded and only home to Native Americans.

The Herrs and several other families built primitive homes to survive those first few years. In 1719, the German architecture style home that stands here today was finally built. 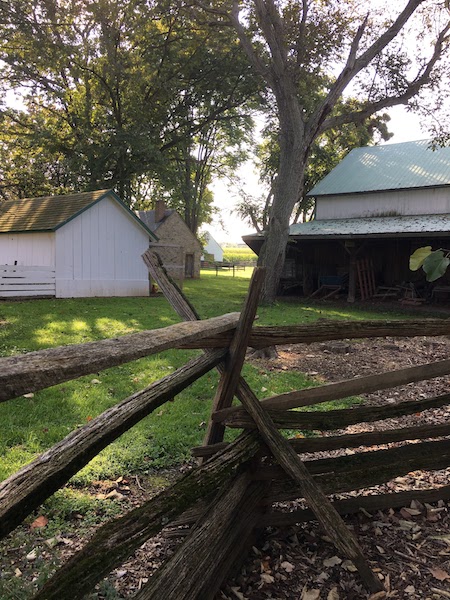 About the Hans Herr House

The family relied on its Germanic sensibilities to build the home. 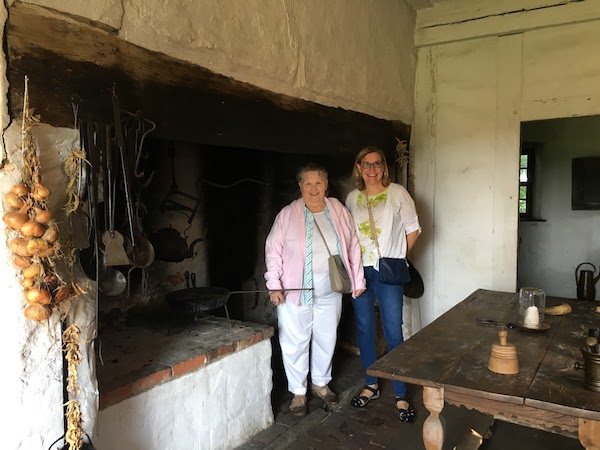 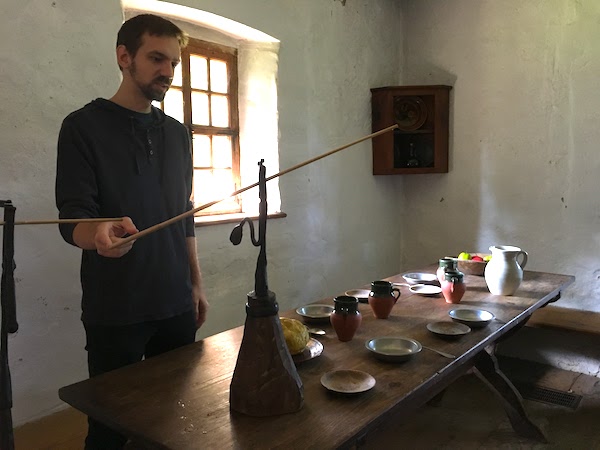 Two attics provide additional space. The first was used for children’s sleeping quarters. The higher attic has a steeply pitched roof and was used for storage. Not one inch of this medieval marvel was wasted.

Perhaps the neatest feature of the German architecture style home is one many people would overlook: the stairs! Each riser is cut from a single log, carefully shaped to allow feet to fit on each tread. This is the only existing staircase of its kind in the United States. (The architect wannabe in me was quite intrigued).

Close up of the stairs

The family built a Victorian home, more popular in the area, in the 1800s rather than try to update the stone house. Because of that, it exists today much as it did when it was first built — rare for old homesteading houses of the 1700s.

Forty-five minute tours are offered at 9:00, 11:00, 1:00 and 3:00. The only way to tour the house is with the guided tour, so plan your visit accordingly. Admission also includes a tour of the nearby Lancaster Longhouse, a replica of a Native American longhouse which would have been prevalent in the 1700s.

Do I recommend a tour of the Hans Herr House to families?

Yes, I do. I honestly believe we gain a lot of insight by learning about the past. To see how people lived in the 1700s helps us better understand other cultures. We can see that not everyone lives like we do — or lived like we do in this case.

For kids, particularly middle elementary and above, seeing the German architecture style home and learning about Martin Luther and Ulrich Zwingli provides “pegs” of sorts to hang more information on as they go through school.

Younger kids might not grasp the details, but the tour moves quickly. Families can also explore the gardens, barns and grounds — so there’s lots of space to run after the tour.

On a less academic front, seeing how these families addressed issues of bitter cold winters, cooking (without burning the house down) and building stairs is pretty cool! I wonder why we abandoned the techniques they used to build less efficient homes.

This is a great addition to a historical trip to Lancaster County, Pennsylvania.

My thanks to Discover Lancaster and the Hans Herr House for arranging my tour. While I received complimentary admission, all opinions are my own.