While you’re at it, explore the hands-on activities to gain a deeper appreciation for this special genre of music.

You won’t be disappointed!

The Rock and Roll Hall of Fame is much more than a museum. Only the most influential people in the music industry earn the honor of becoming a R&R Hall of Fame inductee. Of course, musical artists receive the honor each year, but producers and other music-related figures get inducted into the Hall of Fame too.

The Rock and Roll Hall of Fame showcases Rock and Roll’s significant figures through their many exhibits in the Rock Hall. Writing about all of their exhibits would make for a very long blog post, but here are some of my favorites! And, you discover all of the exhibits on your own when you visit.

The Journey of Rock and Roll

Floor 0 showcases the journey of rock and roll. Although floor 0 is technically composed of many exhibits, it feels like one large exhibit, beginning with early influences, moving through the decades, and finishing with today’s artists. 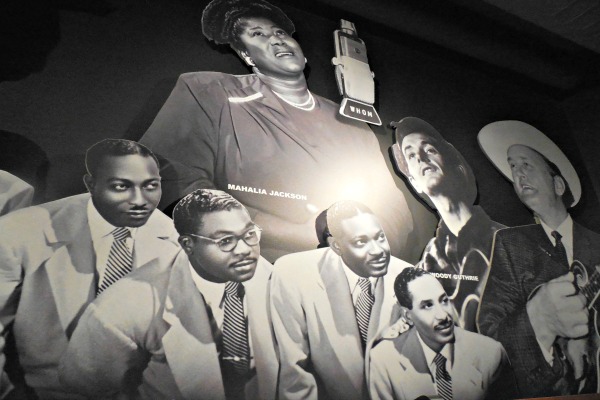 While the Rock and Roll Hall of Fame is about this musical genre, your museum journey begins with its early influences.

[bctt tweet=”Did you know that rock music was influenced by gospel, the blues and R&B? #travel #music” username=”karen_dawkins”]

I’m always amazed when I remember how the rock and roll pioneers managed to take something familiar and turn it into something new. Another great feature of this exhibit is artist quotes crediting their predecessors for their influence, like this one by Jerry Lee Lewis. This personal connection between artist and influencer really highlights how the genre came to be. 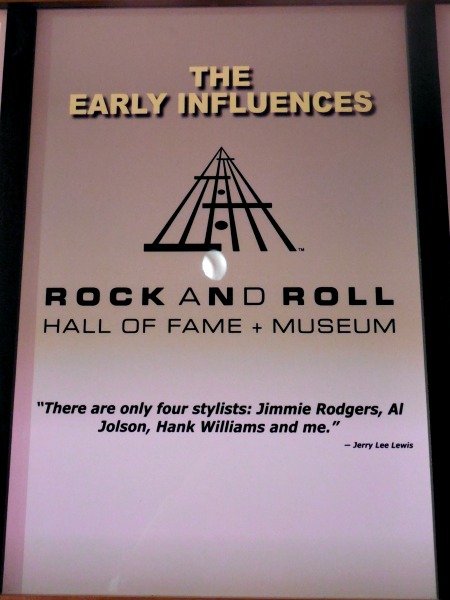 I always hear people say, “Oh, the music in the *insert year they were around the age of high school* was the best!” 80s. 90s. 00s. Music is always changing, but there’s a reason certain music stays popular (and why the artists behind the music are inducted into the HOF!).

Your musical journey continues by viewing memorabilia that belonged to the early influencers, such as this exhibit highlighting “the Blues.” 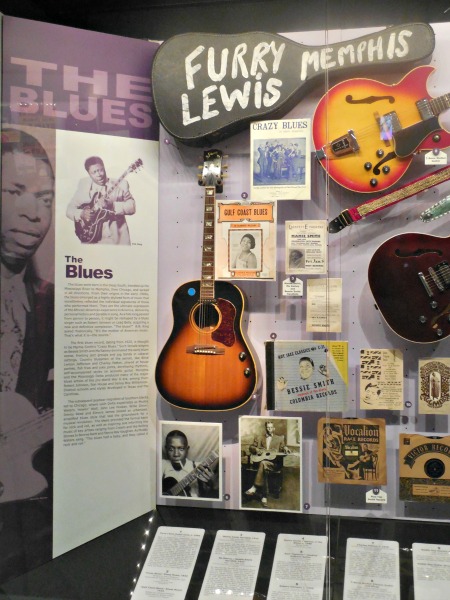 Once you learn about the early influences, step into rock and roll! Where else would the exhibit start but Sun Records, and Elvis?

Of course, don’t forget the Beatles’ era, which is almost as important as the King! Besides the Beatles, you’ll also see memorabilia from the Yardbirds and the Hollies. I’m telling you, it’s awesome! 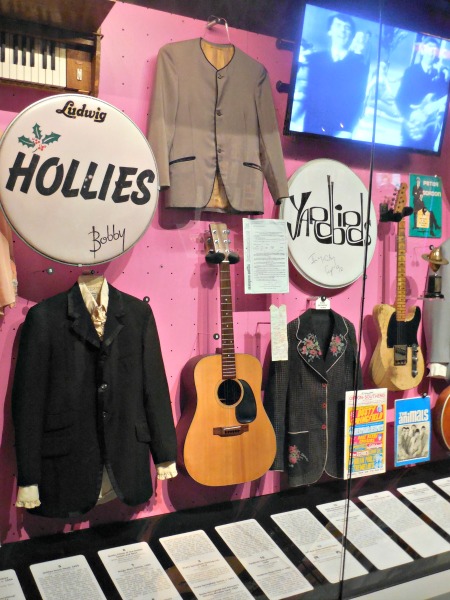 Next stop is the 70s, full of Dead Heads and hippies! 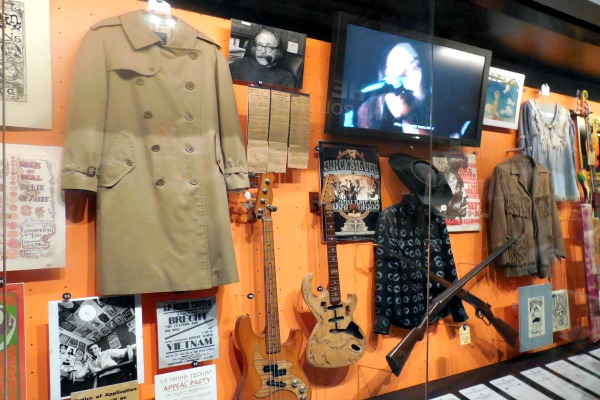 Then, head to the 80s and 90s to see what was popular then. Does it smell like Teen Spirit to you? 😉 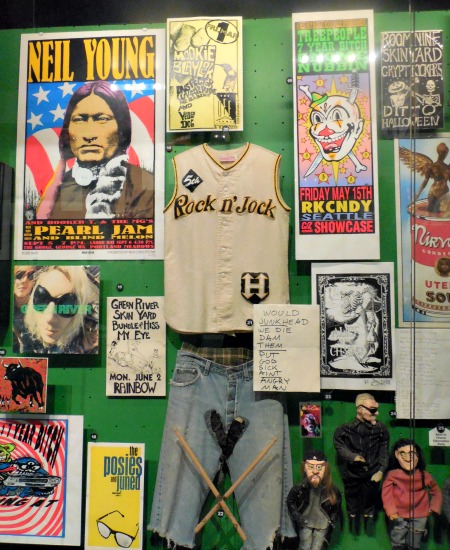 As you visit each era, the displays include amazing memorabilia and video montages of the bands. It’s a music hall of fame — and there’s plenty to hear!

I wish I could share all of the photos I took of all of the museum’s exhibits, but that would make for a very long blog post. You’ll just have to visit yourself to see everything! Besides the evolution of rock and roll, here are some of the other exhibits you will encounter at the R&R HOF:

Beyond costumes, album covers, posters and memorabilia, you’ll enjoy the many multimedia exhibits. The first is Dick Clark’s American Bandstand at the Forest city.RMS Theater, which shows highlights from that iconic show. The second multimedia exhibit is the Video Killed the Radio Star, which features music videos from MTV, from the beginning to the end of MTV’s music life.

PLANNING TIP: The Video Killed the Radio Star exhibit features some mature content, so you might want to skip it if visiting with young children.

Special Exhibits at the Rock and Roll Hall of Fame

In addition to their permanent exhibits, the Rock and Roll Hall of Fame also showcases special exhibits. On our trip, we visited the MELLENCAMP and the Rolling Stone/50 Years exhibits.

Okay, I actually don’t know who Johnny Cougar/John Mellencamp is. But, I still appreciated the MELLENCAMP exhibit which is open through Labor Day! I do know he’s a significant music figure, and that his name wasn’t originally John. (You guys can inform me about who he is in the comments below.)

I actually really enjoyed this exhibit, because Johnny Cougar/John Mellencamp is the quintessential artist. While he didn’t get great grades in school except in the arts and struggled with everything that wasn’t creative, he still had a successful career. He’s quite an inspiration to creative genius. 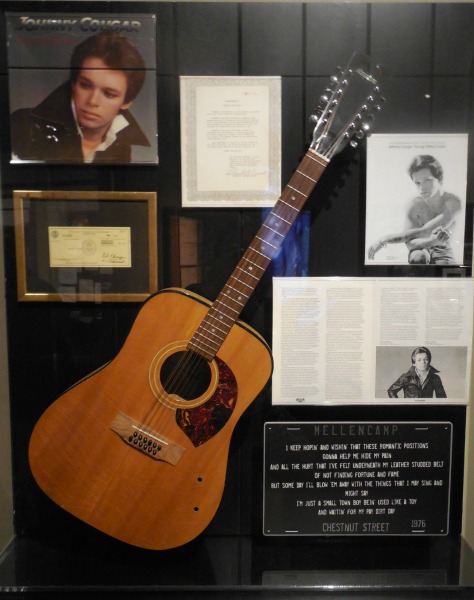 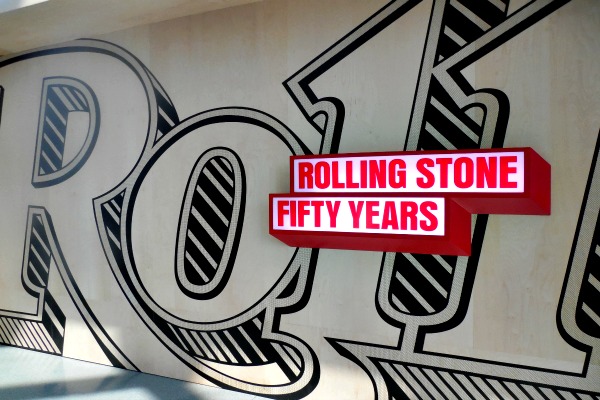 The Rolling Stone/50 Years Exhibit, open through Winter 2017, is really cool! Sprawling through three levels of the museum, it showcases interviews, letters to the editor, iconic album covers, and a life-size model of the very first Rolling Stones office. 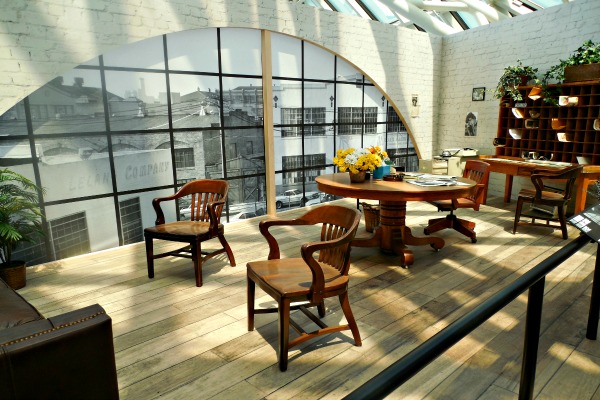 The Rock and Roll Hall of Fame is definitely one of the best things to do in Cleveland, but it might not be ideal for all families. Consider these recommendations to improve your experience!

Visit the Rock and Roll Hall of Fame

Budget Tips for visiting the Rock and Roll Hall of Fame

If you think you’re up for visiting two museums, you can purchase the Science Rocks package. As long as you visit the same day, this package gets you access to the Rock and Roll Hall of Fame and the Great Lakes Science Center. Tickets start at $32.25 for adults. To learn more, click here. Note: The package must be purchased online!

To save a little more, park at the Great Lakes Science Center parking garage. Just remember to get your parking validated at the front desk!

Learn more about vacationing in Ohio 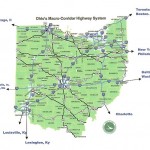 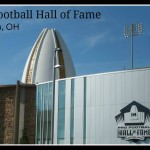 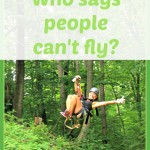