Home » Interests » History » Visiting the National Museum of the Marine Corps: A DC Must See! 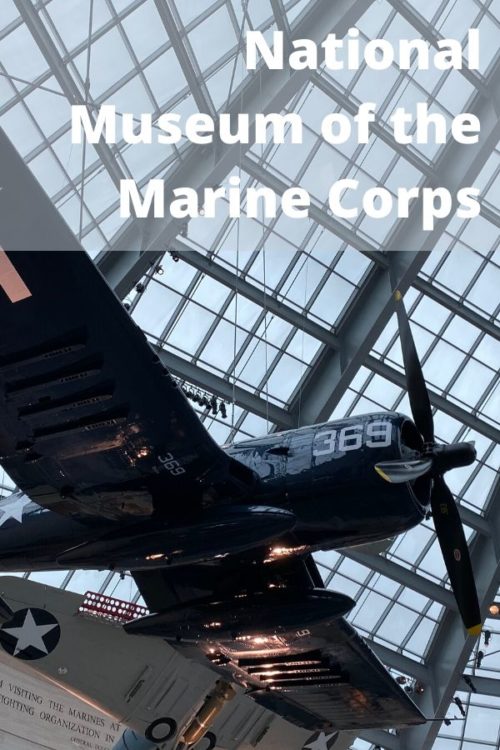 Y’all, I finally got to visit the National Museum of the Marine Corps — something I have long wanted to do.

The Marine Corps Museum, Quantico, Virginia sits right next to I-95, just south of Washington, D.C. If you’ve ever driven I-95 through the area, you’ve seen the building with its steel beam jutting out from an unusual glass and steel structure. It’s certainly impressive — and hard to miss! 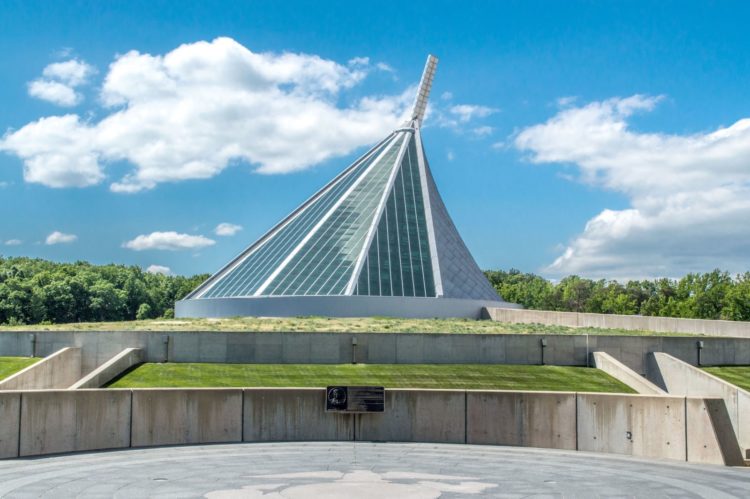 You see, I pass by the National Museum of the Marine Corps every time I drive north to visit family. But, I never knew that’s what it was! Seeing signs for Quantico, I always assumed the building was some top-secret military installation, with credentialed access only. Had I known it was a public museum, I would have stopped in a long time ago!

Anyway, the day I went to the Marine Corps Museum I was supposed to visit to the Neabsco Creek Boardwalk. But, I woke to a miserable, cold rain, hardly the weather for a boardwalk stroll. My host with Visit Prince William County changed my itinerary and sent me to the National Museum of the Marine Corps instead. (The photo below is the Neabsco Creek Boardwalk. Beautiful, but I think I’ll visit when it’s not sleeting!) 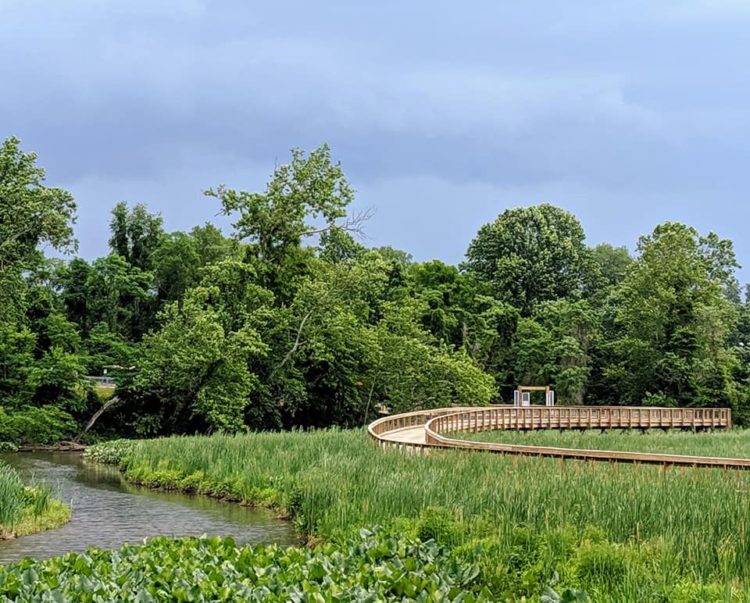 Pulling into the parking lot, I was overwhelmed by anticipation.

Visiting the National Museum of the Marine Corps

The USMC Museum is located at 18900 Jefferson Davis Hwy. in  Triangle, Virginia. Though, many people call it the Marine Corps Museum in Quantico, due to its proximity to the Marine Corps Base just down the road.

I was excited about visiting this museum because of the architecture (no surprise) and because my brother is a Marine. Walking up to the entrance, my eyes welled with tears.

It would not be the last time.

Exhibits at the Marine Corps Museum 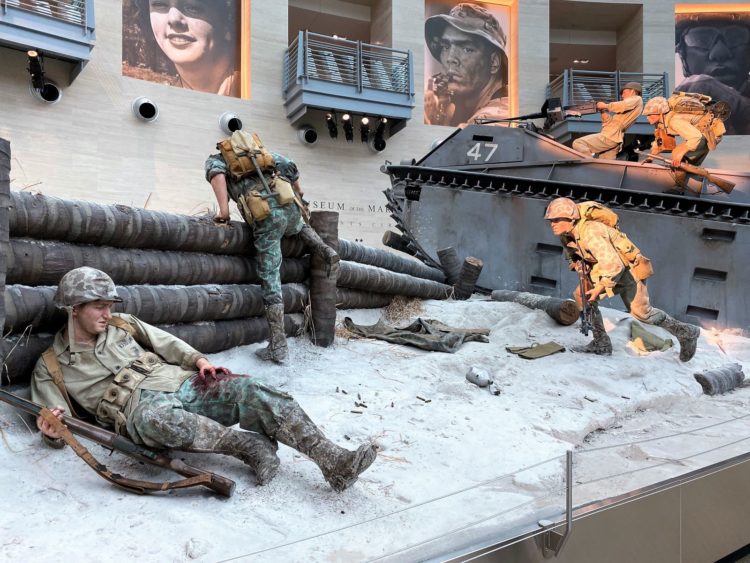 A visit to the National Museum of the Marine Corps starts in the Leatherneck Gallery — yes, the very space I had dreamed of seeing! This massive space encapsulates the entire history of the USMC in one light-filled room. Aircraft, military vignettes, quotes of courage and determination and so many other thoughtful pieces fill the gallery. In this one spot, visitors get a sense of the pride, the determination and the honor that come with the title U.S. Marine.

Just be sure to look up! That stainless steel beam is just as impressive inside as it is outside.

Around this central area, visitors can head into the main exhibit space, the children’s museum area, the Marine Corps Museum Store, the art galleries or the restaurants onsite.

The next exhibit to see is called Making Marines. My tour guide, herself a Marine, started at this exhibit which highlights the process new Marines go through, from recruit to graduate — and everything in between. Each interactive element transports Marines back in time while helping civilian friends and family better understand what they went through.

A laser rifle range simulator (cost $5.00) lets museum guests ages 5 and over test their marksmanship skills. The rifle range was quite popular with veterans visiting the day I was there.

Most of the galleries in the USMC Museum are arranged by historical time period. They include the American Revolution, the Global Expeditionary Force, World War I, World War II, the Korean War and the Vietnam War. Temporary exhibits tell the story of the Marines since the Vietnam War — and more permanent exhibits are in the works. 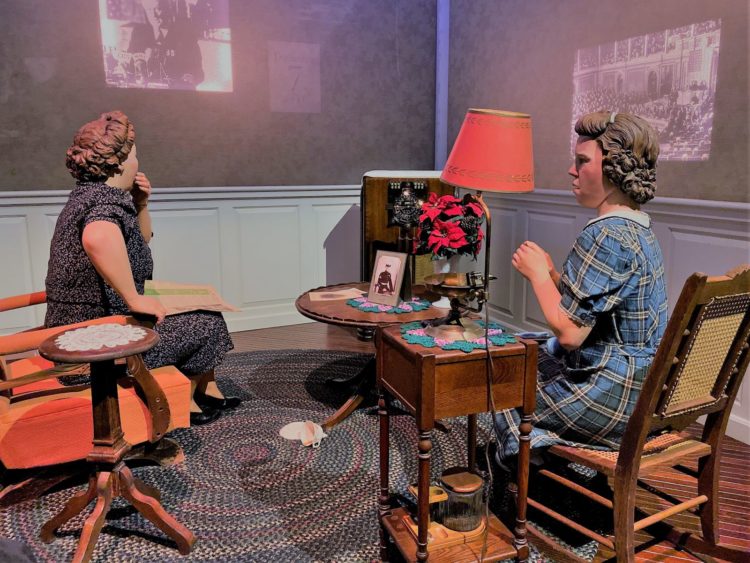 Each exhibit is introduced with a vignette that sets the stage for the war era to be explored next. For instance, a vignette of two ladies sitting by a radio with Christmas decorations signals the bombing of Pearl Harbor that drew the US into WWII.

In each gallery, wall murals and dioramas tell stories about the era including combat, contributions, and the efforts of individual Marines. Visitors learn about the weapons and equipment used by combatants on both sides of the battle lines.

Lights, sounds, video and even the temperature within an exhibit bring history to life. My guide explained that taking her grandfather through the museum helped her better understand his experience in World War II. She explained that the museum gives Marines a base from which to begin, allowing them to articulate things they never could share with family members before.

I visited the Marine Corps Museum the day after Veteran’s Day — and happened to be there while 600 veterans from all branches were touring the museum. Observing those men, I could see that the museum brought them together in a common experience. They might not have fought in the same battles or even in the same war, but their shared experience was clearly tangible.

I mentioned earlier in this post that my eyes filled with tears more than once. In the historical exhibits, I choked up at the sight of veterans standing silently side by side to watch a war video. Tears filled my eyes (and spilled out) as I took in the flag that flew over Iwo Jima.

Opposite the flag, a simple, yet profound display shows how many people died in the Battle at Iwo Jima. In orderly rows and columns, one pin for each Marine and Navy Sailor killed in battle is displayed. There is one pin for the lone Coast Guardsman who was killed as well. It brought the sacrifice into clear focus for me.

Throughout the USMC Museum, the Legacy Walk ties the museum’s exhibits together. It also includes a timeline that details Marine activities at home and abroad since 1775. Special exhibits along the way explore the symbols, the music and other elements integral to Marine Corps culture. It’s like a giant timeline of “recent” world history, chronicling both Marine Corps history and world history.

If you don’t have a lot of time to visit the museum, the Legacy Walk is a great way to catch the highlights and learn the basics of Corps culture.

Kids and the USMC Museum

The Marine Corps Museum is a war museum. There’s no way around that. To tell the story of the U.S. Marine Corps without depicting scenes of war wouldn’t make much sense. There are guns and tanks and fighter jets. Some scenes depict the wounds people suffer in war.

But, my guide assured me that kids are able to process what they see. She encourages parents to listen to kids’ questions and explain things in age appropriate ways. 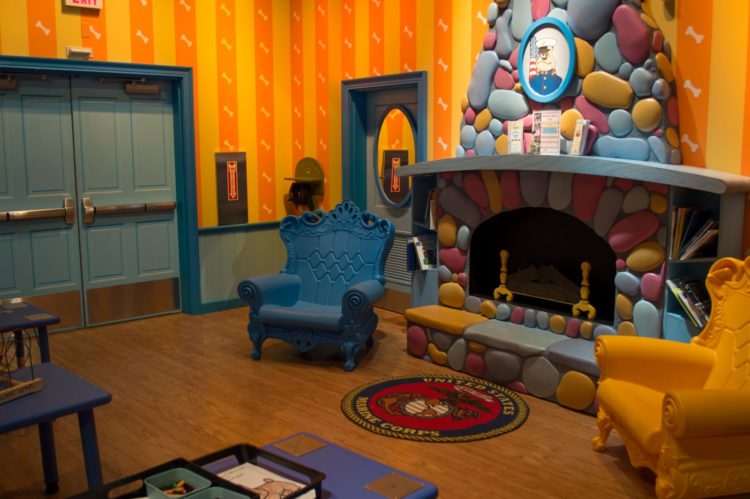 She also explained that museum exhibits were designed with the help of Disney Imagineers with meticulous attention to detail.

Throughout the historical galleries, interactive exhibits designed for kids make the museum manageable for little ones.

I would not hesitate to take young children to this museum.

The Marine Corps Museum doesn’t often get crowded, so there’s no bad time to visit. But, there are things you can do to make the most of your visit. 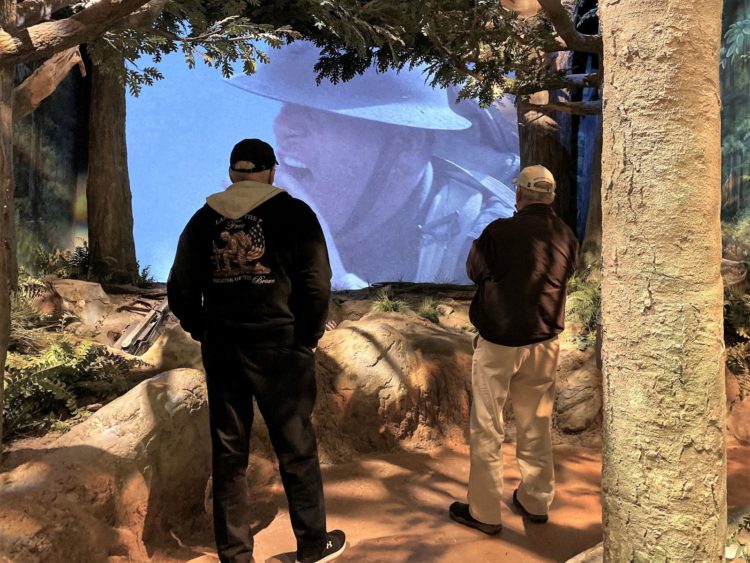 If visiting with a military veteran, whether Marine or another branch, tour the museum at their pace. They are reliving a part of their life as they go through the exhibits — that’s a lot of emotion and memories to process.

Pin it for later 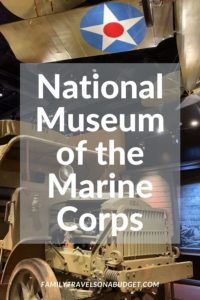 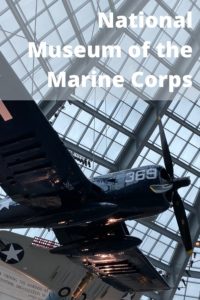 The National Museum of the Marine Corps ranks high on my list of must-see places in the Washington, D.C. area. Our Washington, D.C. Vacation Guide has more ideas for vacationing in the nation’s capital.