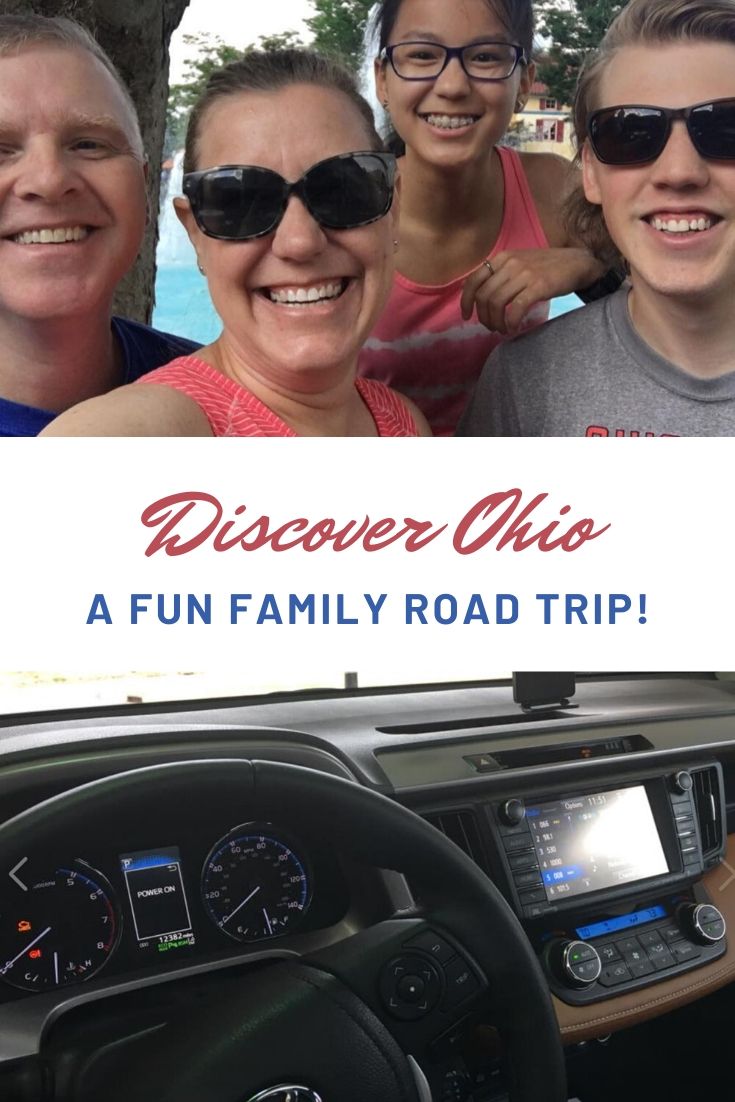 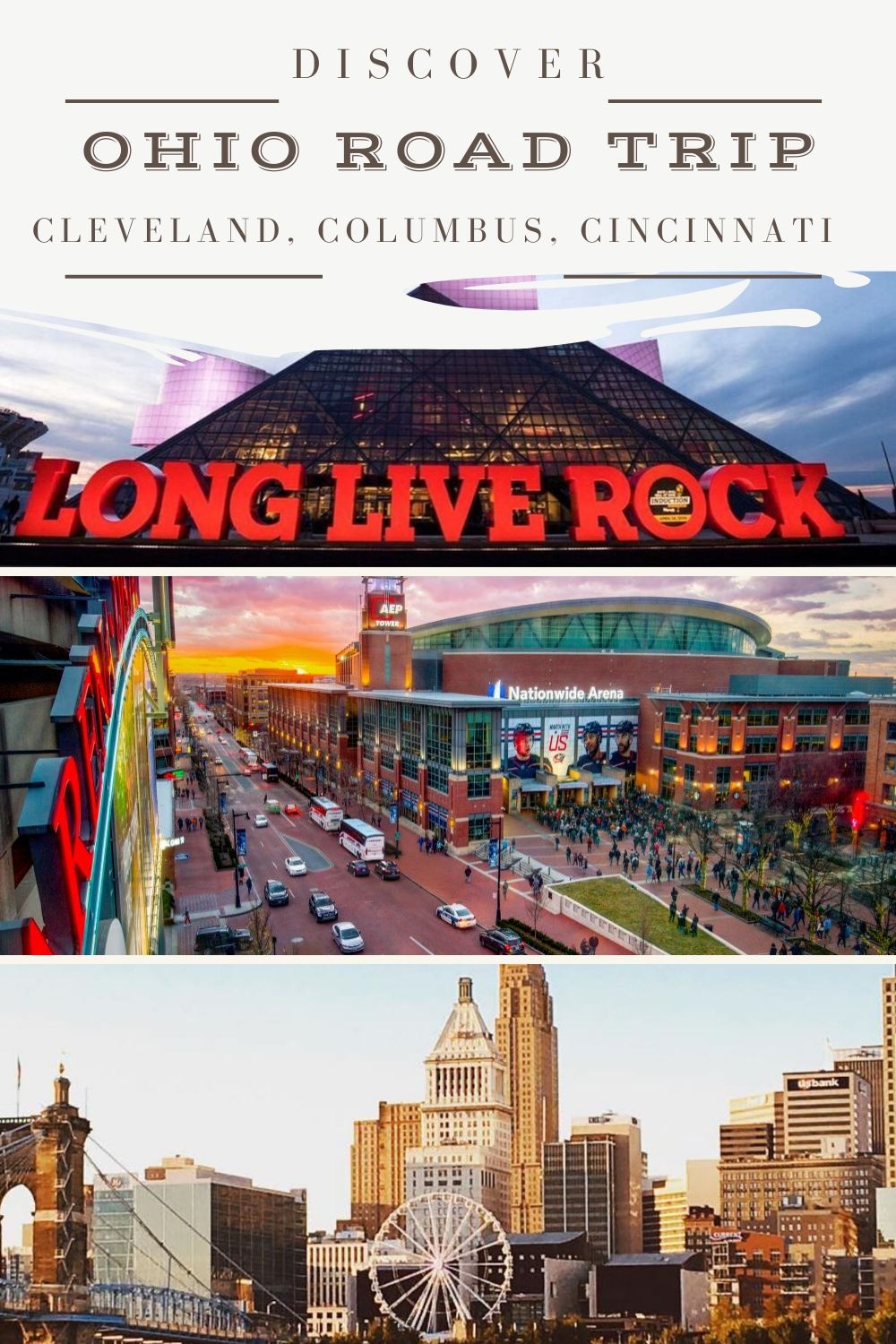 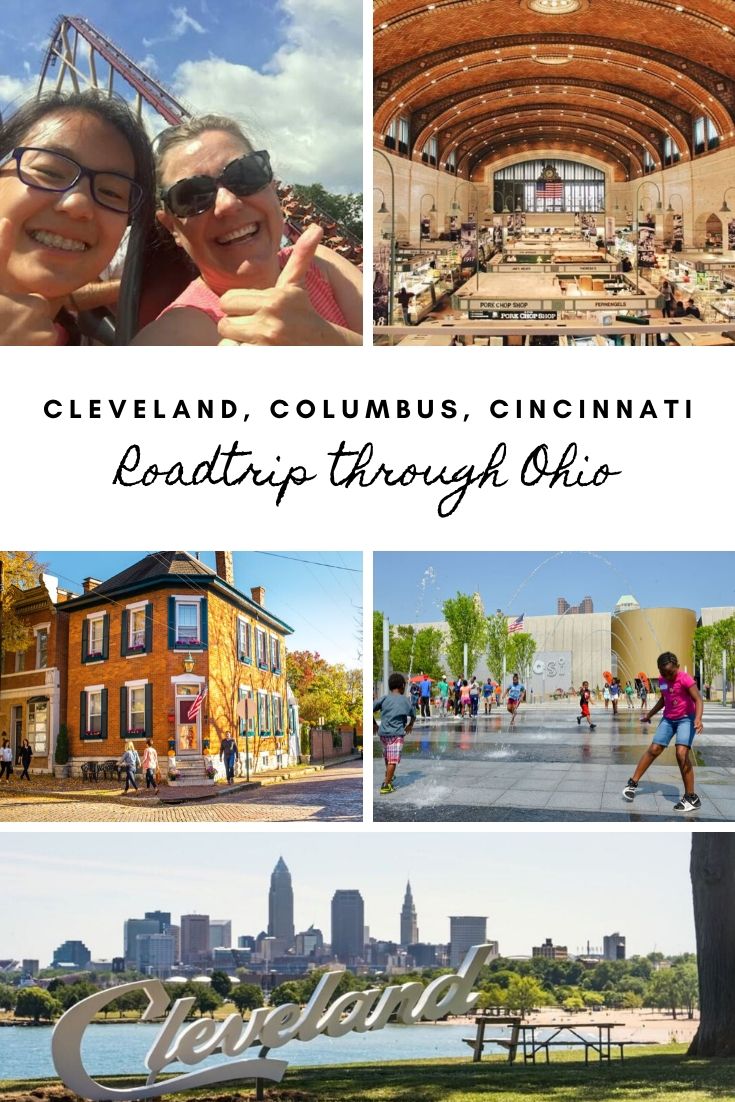 Did you know that Ohio is one of the most popular vacation destinations in the United States?

Ohio is in “the heart of it all,” an easy drive from more than 60% of the nation’s population.

Not only that, but Ohio has loads to do whatever your interests.

Lots of people are… So, I put this road trip together to help you plan the perfect Ohio road trip for your summer family getaway.

It starts in Cleveland, goes through Columbus and ends in Cincinnati — a drive of only four hours!

How’s that for a road trip? Not much drive time but lots to see!

Plan your own Discover Ohio family road trip with this guide. It’s set up with an intro to each city followed by the best recommendations for every interest so you can pick the things that are best for you.

Discover Ohio: Fun things to do in Cleveland, Ohio

We’ll start this road trip in Cleveland, Ohio on the southern shore of Lake Erie. If you’re flying in to start your Ohio road trip, Cleveland Hopkins International Airport (CLE) is going to have the most options.

Where to stay in Cleveland, Ohio?

As a major US city, there are tons of hotels in Cleveland, Ohio to choose from.

There are so many great choices, I recommend you pick the hotel with the amenities you want closest to the things you want to do.

Fun things to do in Cleveland, Ohio

There are lots of great Cleveland, Ohio attractions. When planning your vacation, consider these fun things to do in Cleveland.

History fans will find lots of things to do in Cleveland, Ohio.

Our favorite Cleveland, Ohio attractions for history buffs are:

Situated on the southern shore of Lake Erie and the Cuyahoga River, there are lots of things to do in Cleveland, Ohio for adventurers.

Some of the best Cleveland, Ohio attractions for adventurers are:

The three teams play in state of the art facilities in the heart of Downtown Cleveland. Whether the teams win or lose, catching a game is guaranteed to be fun for the family. The stadiums all have family friendly amenities — even family seating sections.

Check to see who’s playing when you visit and enjoy a game with the locals.

>> Sports fans headed to Columbus from Cleveland will enjoy a stop at the Pro Football Hall of Fame in Canton.

Cleveland has loads of fun things to do with the kids. We recommend some of the attractions already mentioned in this post, including the Rock ‘n Roll Hall of Fame, a major league sports game, or a stroll along the river at Brandywine. But, there are lots more Cleveland, Ohio attractions to enjoy with the kids:

Since Chef Michael Symon made Cleveland famous on the Food Network, the city’s food scene has boomed. The area is also home to many local breweries and pubs, making it appealing for an adult getaway too.

Top food destinations in Cleveland are:

After spending a few days enjoying Cleveland, the next stop on your Ohio road trip is Columbus, Ohio. It’s an easy, two hour drive south on I-71. You will pass Canton, Ohio and the Pro Football Hall of Fame if you want to take a break. You’ll also drive past Ohio’s Amish country, if you want to stop at one of the small towns for a home cooked meal or a slice of homemade pie.

Discover Ohio: Fun things to do in Columbus, Ohio

Columbus is the state capital, home to The Ohio State University, the state government and several corporation headquarters.

The city sprawls, with charming neighborhoods near downtown offering eclectic experiences in shopping, entertainment and dining. The suburbs around the city offer even more to see and do.

Where to stay in Columbus, Ohio?

Choosing where to stay in Columbus, Ohio might depend on what you want to do during your stay. If you’ll be going to museums, attractions and restaurants closer to downtown, consider staying at one of the historic hotels in Columbus, Ohio.

Three historic hotels in Columbus, Ohio we recommend are:

If staying in the historic city center isn’t a priority, consider staying at some of the brand hotels near Columbus, Ohio. For instance, families planning a zoo trip might consider hotels in Dublin, Ohio just outside the capital city.

Fun things to do in Columbus, Ohio

There are so many fun things to do in Columbus, Ohio, you could plan a whole week’s vacation here. For an Ohio road trip, we recommend picking three or four of these Columbus Ohio attractions to enjoy.

When considering historic activities in Columbus, Ohio, these are our top picks:

When considering fun things to do in Columbus, activities for adventurers abound.

Probably the best known sports team in Columbus is the NCAA Ohio State Buckeyes football team. Playing at historic Ohio Stadium, this is the big ticket in Columbus each fall.

But other teams play here, too, making Ohio a great vacation destination for sports fans year-round. When planning your Ohio road trip, check to see if tickets are available.

Check out these Columbus sports teams:

Things to do in Columbus, Ohio for families

We lived in the Columbus, Ohio area when our kids were young and loved having so many family friendly attractions to enjoy. When planning things to do in Columbus, Ohio with the kids, you’ve got lots of choices.

These are our favorite Columbus, Ohio attractions for families:

Things to do in Columbus for foodies

When thinking of things to do in Columbus, Ohio, allow plenty of time to eat! Columbus is often overlooked as a foodie destination, but you’ll find great cuisine from around the world here.

When I consider things to do in Columbus for foodies, a couple traditions come to mind: Schmidt’s Restaurant and Banquet Haus in German Village and Graeter’s Ice Cream, with locations all over the city.

Schmidt’s Restaurant has been serving authentic, German cuisine since 1886 at its German Village location. Serving a variety of German sausages, braised cabbage and German potato salad (to name a few), the restaurant’s authentic flavor brings patrons back again and again. (I’ve been eating here since 1980!). Save room for the giant cream puffs — big enough for two to share, though you might not want to.

Graeter’s Ice Cream, the only commercial ice cream maker still using the French pot method of ice cream making, is actually a Cincinnati based company. But, I discovered it in Columbus, so I recommend it here. Graeter’s is committed to its process, quality ingredients and great customer service. (And, lucky for me, it’s now available in stores where I live!)

North Market at 59 Spruce Street is an eclectic market that has been in business for more than 140 years. Priding itself on local, fresh and unique cuisine, the North Market is popular with foodies. Find fresh foods like produce, meat and seafood, specialty food items, international prepared foods, fresh flowers and unusual gifts. It’s a great place to grab a quick bite or do some gift shopping.

While you could spend your whole vacation in Columbus, there’s even more to discover in Cincinnati, Ohio. It’s a short, 90 minute drive from Columbus to Cincinnati on I-71.

Discover Ohio: Fun things to do in Cincinnati, Ohio

Cincinnati, southern Ohio’s charming town on the banks of the Ohio River, is a great place to wrap up this Ohio road trip. Because of its location on the Ohio River, steamboats connected Cincinnati to New Orleans and St. Louis, establishing it as an important business hub in the early 1800s. The city’s history can be seen in its architecture and attractions.

Where to stay in Cincinnati, Ohio?

When looking for the best hotels in Cincinnati, consider what to do in Cincinnati and pick a great hotel nearby.

These are our recommendations for the best hotels in Cincinnati:

Fun things to do in Cincinnati with kids

With its strategic location on the Ohio River, it’s probably no surprise that there’s a lot of history in Cincinnati. These are the best Cincinnati attractions for history lovers:

Cincinnati attractions for urban adventurers make for a fun twist on traditional adventure activities. Here are some fun ideas for those who like exciting challenges:

Like other major cities in Ohio, there are lots of Cincinnati attractions for sports fans. Cincinnati is home to the MLB Cincinnati Reds, NFL’s Cincinnati Bengals and the MLS FC Cincinnati. The University of Cincinnati sports teams also play here.

There are so many family friendly things to do in Cincinnati, making it a great place to end an Ohio road trip. Of course, Kings Island tops the list of Cincinnati attractions for summer family fun.

When it comes to food, there’s a lot to enjoy in Cincinnati. Iconic foods include Cincinnati’s own Skyline Chili and Goetta, a German-style sausage made with oats and spices and available at several local restaurants and grocery stores.

Other Cincinnati attractions for foodies include:

Like Cleveland and Columbus, there’s plenty to do in Cincinnati to make it a full week’s vacation, but it’s also a great place for a weekend getaway or as part of an Ohio road trip.

Ohio’s major cities: Cleveland, Columbus and Cincinnati share the same first letter, but each city is unique. Each city’s history is shaped by its location, by history, and by its role in society today. Discover Ohio through the history, food, culture and fun each of these great cities has to offer.