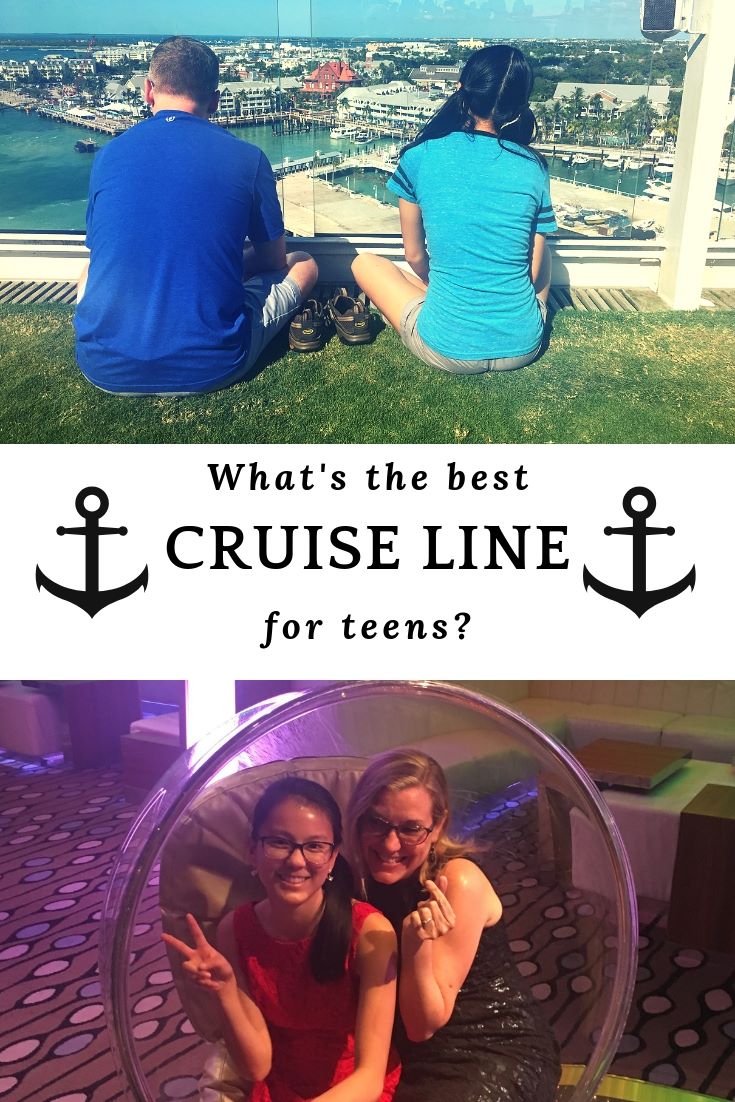 We just got back from vacation on Celebrity Equinox, one of the most popular Celebrity cruise ships for North American cruisers. When planning our trip, Ellie and I looked online to find out the activities for teens on the ship. But, the Celebrity Cruises website only mentions the teen club and spa treatments for teens. We weren’t sure this would be the best cruise line for teens.

At the same time, Celebrity Cruise Line caters to family togetherness, with most activities open to families of all ages — like trivia challenges, scavenger hunts, live theatrical shows and “Silent Disco.” For families who want to spend time together, Celebrity might have the best cruises for families with teenagers. We met many families who were hanging out together, enjoying the hot tub, long dinners and fun in the ports. 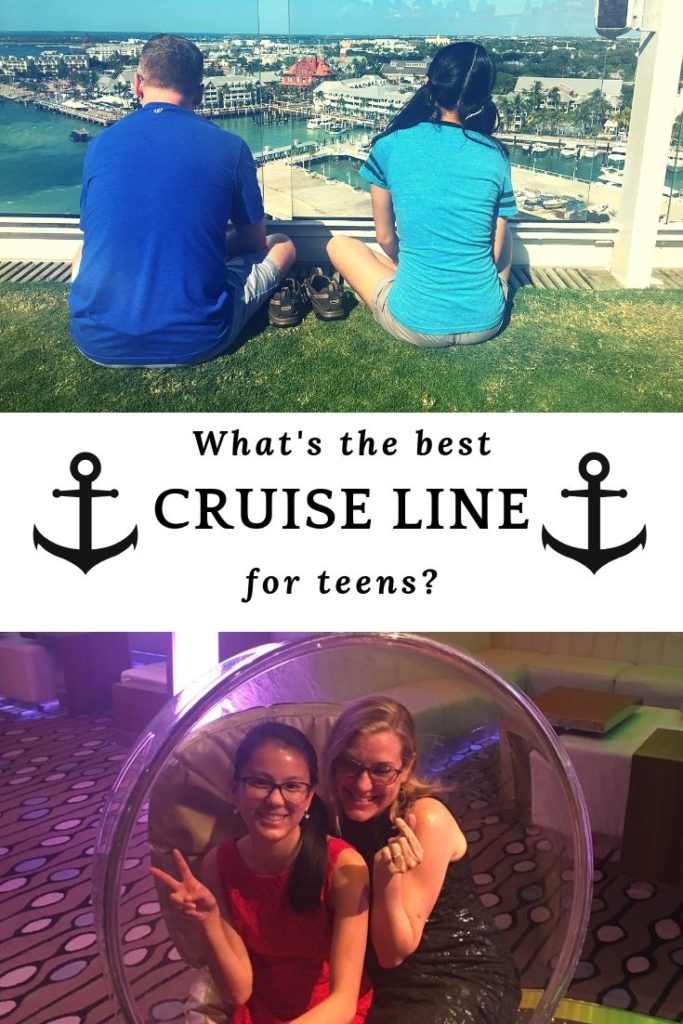 But, having seen two teens through the teen years and being partway through this tricky time with the third, I also know that most teens like some time off away from mom and dad. Being together 24/7 isn’t everybody’s idea of the ideal cruise with young adults.

Thirteen fun things for teens to do on Celebrity Equinox

So, Ellie — being of the NOW generation — made an awesome video of all the cool things for teens on Celebrity Cruises. Here’s the video for those who, like her, prefer YouTube! Take a look and let us know if you think it’s the best cruise line for teens!

If you prefer the written version, here’s her awesome list of 13 activities for teens on Celebrity Equinox. Here’s a link to the deck plan for the super-planners, like me!

Hang out in the Teen Room

At the front of the ship, called the bow, on Deck 15, teens can hang out in the X Club. Every day, trained staff plans fun things for teens to do. The X Club has several lounge areas, board games, video games and planned activities. Many of the activities for teens start by meeting in the X Club, but then teens head off to other parts of the ship for the activities. It’s a laid back space — and no parents are allowed!

At the back of Deck 15, officially called the stern, teens, adults and kids can practice their putting game. Celebrity Equinox does not have a putt putt course like many Royal Caribbean and Disney ships do, but it’s still fun! For families who like golf, this might be one of the best cruises for families with teenagers. Get a couple putters and challenge each other to hit the best shot! Ellie’s got a great short game — and not just because she’s only 5’1″!

Across the hall from the X Club, teens (and their families) can challenge each other to traditional arcade games like racing games, air hockey and other popular video games. Games in the arcade are an extra cost not included in your cruise vacation fee — yep, even at sea, there’s such a thing as pay to play.

Chill out at the pool

Of course, no cruise would be complete without some pool time! And, on Celebrity Equinox, there’s no shortage of lounge chairs and space poolside. You’ll find the pools and hot tubs on Deck 12 and additional lounge chairs on Deck 14, overlooking the main pool. Throughout the day, enjoy live music, line dancing and poolside games. Side note from mom: I out-danced my daughter! WOOHOO…

But this is a post about the best cruise ships for teens, so back to the teen stuff… 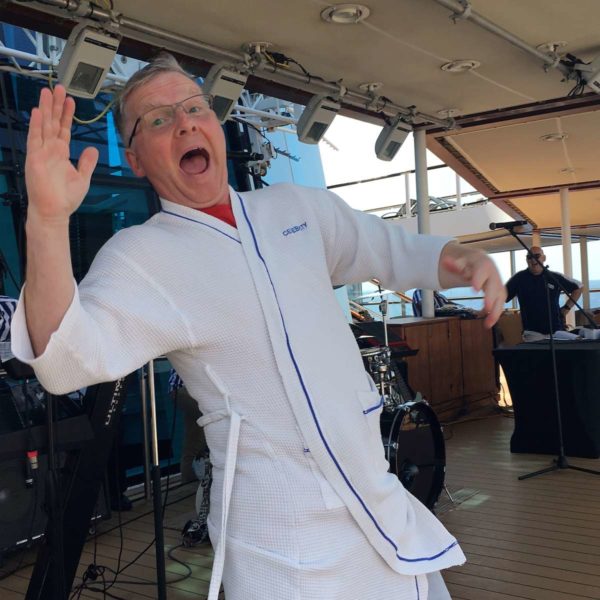 Celebrity Equinox has a two story library on Deck 1o near the main elevators midship. Ellie found it the first day — and even found a book in Korean to try to decipher! She’s been learning Korean from a friend at school, but found the book too advanced. So, she went and got another one in English.

While the library might not be considered one of the most cool things for teens, it is handy for teenagers on spring break who are also studying for AP exams and college entrance tests. The library got quite a workout during our spring break cruise! 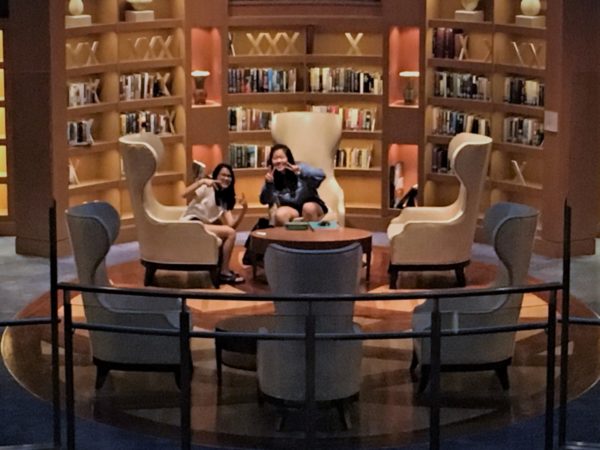 The library was a popular teen hangout on spring break!

Relax in a lounger

Besides the pool chairs, there are some pretty sweet loungers on board the Celebrity Equinox! Thankfully, Ellie allowed me to hang out with her — and we had some pretty fun conversations! We felt spoiled having such luxury available — no extra fee to reserve the loungers, either!

Work out at the gym

Of all the cruises I’ve been on, the workout facility on the Celebrity Equinox is, by far, the nicest! There are loads of bikes, treadmills, free weights, exercise balls and weight systems on the ship — and the view is AMAZING! The fitness center is at the bow of the ship on Deck 12 — pass through the Canyon Ranch Spa to get there. With chilled towels, water and saunas in the dressing rooms even those reluctant to work out might actually enjoy it onboard!

Book Celebrity for Modern-Luxury and Culinary Excellence. Only at CruiseDirect.com!

If breakfast, lunch and a three course dinner aren’t enough, you can always grab a snack during the day. We loved the fries at the Mast Grill (Deck 14, near the pool) and hand-dipped ice cream from the Oceanview Cafe (Deck 14, stern of the ship).

Here’s an insider tip, if you like sweets, the desserts at Cafe al Bacio (Deck 5, midship) has the best sweet bites onboard! I was a huge fan of the lemon tarts, but you decide what’s best. These desserts are free — just pay for specialty drinks.

Lounge on the lawn

One of the best features — certainly one of our favorites — is the grassy lawn on Deck 15. Yes, there’s a half-acre, real-grass lawn on the Celebrity Equinox, Deck 15. Imagine walking barefoot across the cool grass while basking in the sun as you watch the water roll by. OOOHHHHH!

The grassy lawn is a great place for a picnic lunch. Or, take a book and enjoy the solitude of this special place. We met lots of people who enjoyed the lawn as much as we did — particularly, Victor Franks, turf specialist who took the cruise just to play bocce on the grassy lawn. 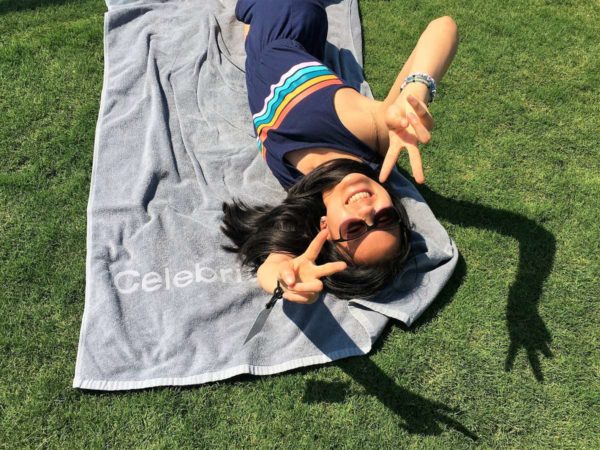 Grass on a cruise ship? Sweet!

Play a board game

In the Card Room (Deck 9, midship), we saw lots of teens playing board games. With Monopoly, Checkers, Chess and Clue (to name a few), there’s lots to choose from. The Card Room also has decks of cards and bunch of puzzles. This might make the Celebrity Equinox one of the best cruises for families with teenagers! We saw lots of families playing games at the card tables throughout our week at sea. And, they really looked like they were having a great time! 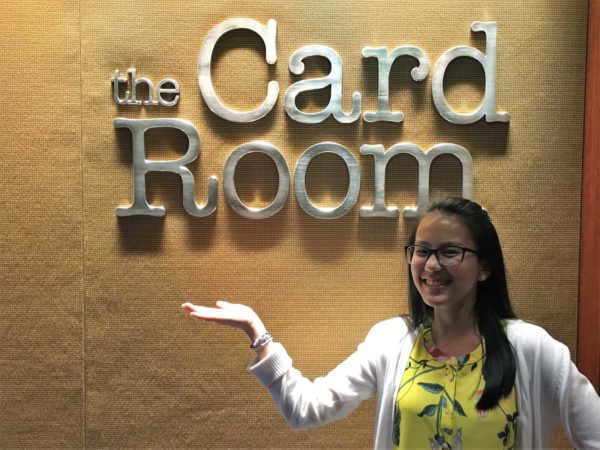 Ellie, aka Vanna White, in the Card Room

Every day, you’ll find live entertainment on board. The ship’s singers and dancers perform several live shows during the week, and special performers come in too. On our cruise, we enjoyed a magician’s show and a comedian in addition to the three live performances by the “regular” performers. 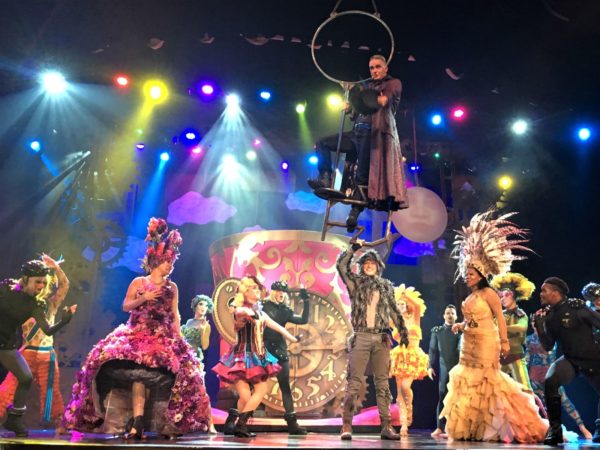 Throughout the day, musicians perform at various locations on board making this one of the best cruise lines for teens.

One of the most cool things for teens and their families are the special dances. We loved the silent disco — so much so that we went both nights and danced our hearts out. 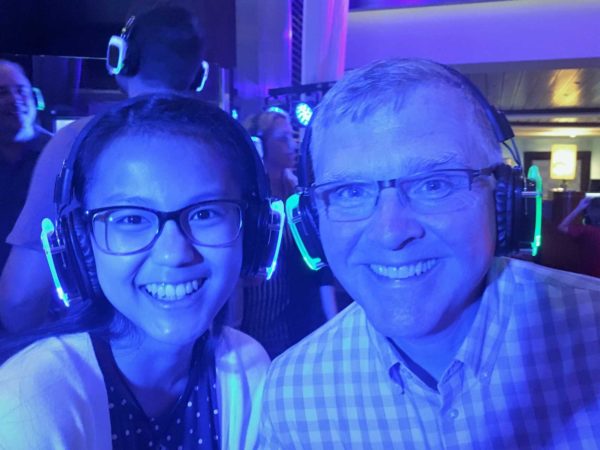 Shop till you drop

Or… at least enjoy the shopping on board and in port.

My husband has a great tip for those who want to shop WITHOUT being bombarded by salespeople: Don’t take mom! He first noticed it in Costa Maya. The three of us, teen included, wandered through the shops. Every time I walked through the door, salespeople approached us immediately. When I stepped away to check in by text with the kids stateside (free texting for AT&T customers in Mexico), he kept shopping with our daughter — without a single person “offering” to help.

We have decided that from now on, he’s the shopper and I get to hang out at the coffee shop! Ellie really doesn’t care either way as long as she gets to shop! (Don’t believe me — watch her video starting at 2:30! Hilarious!) 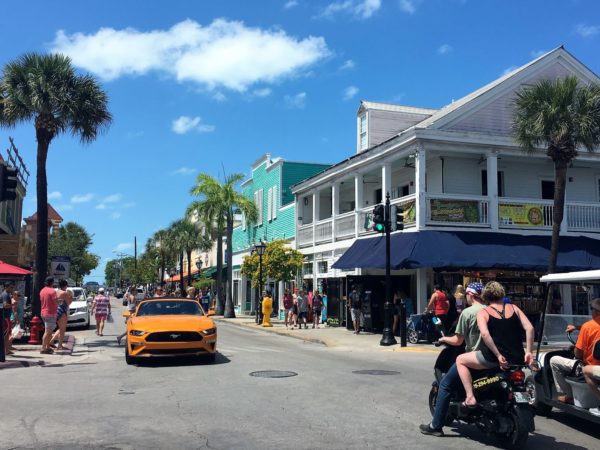 After all, it is a cruise! There are so many places to watch the water roll by on Celebrity Equinox. Most cabins have balconies (aka, verandas). There are views of the water from all the public decks, including Decks 5, 12, 14, 15 and 16. Find a spot and watch your cares melt away.

Ellie and I hope this post helped you decide whether Celebrity Cruises is the best cruise line for teens you might find yourself vacationing with in the next few years!

If there’s anything we left out, leave us a comment. Ellie and/or I will get back to you!