Home » Interests » Beaches » Leave Only Footprints: It’s not a motto, it’s a mission. 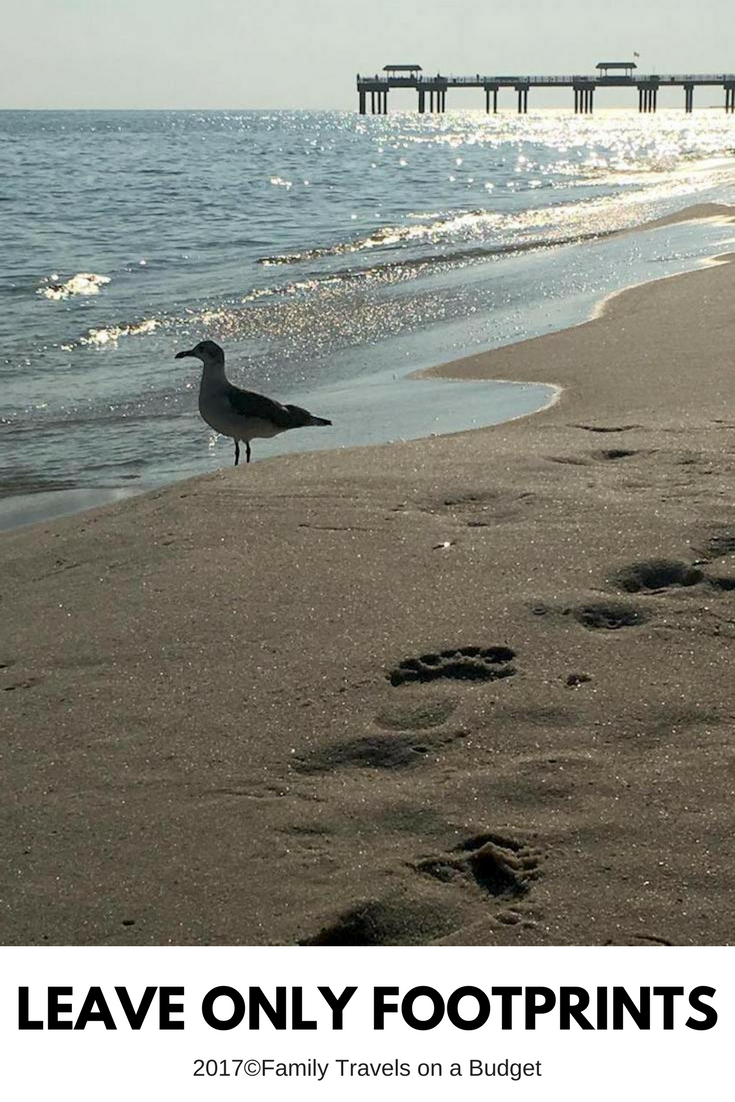 When Gulf Shores and Orange Beach invited me to learn about their Leave Only Footprints initiative, my first thought was sure. I mean, who says no to the beach?

And, I figured it would be easy to write about their clean up efforts. I like eco-tourism.

So I went to the beach — fully intending to do my part and leave only footprints and write a sweet little environmental article to inspire people to clean up their trash. Easy peasy.

At the beach, I met lots of people.

As I was leaving my condo one morning, an older couple and I chatted about restaurants and beach trips. They were celebrating their anniversary, a little surprised that I was there alone. I asked if they knew about Leave Only Footprints, to which they replied they’d seen the flyer about it in their suite. Other than picking up trash, they didn’t know more. 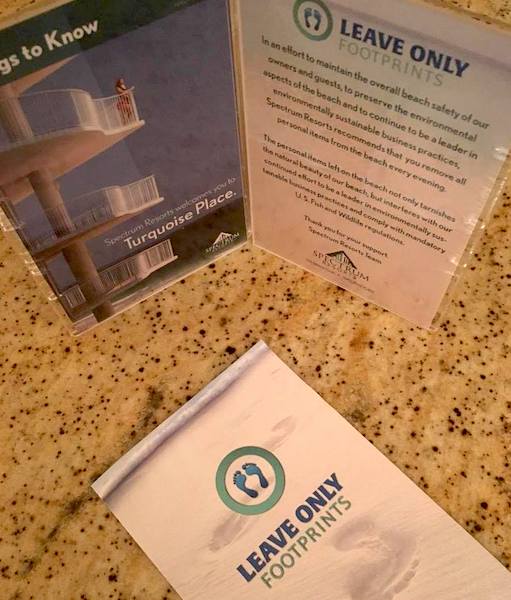 I asked some fishermen, who had befriended a blue heron by sharing their bait fish, if they had heard of Leave Only Footprints. They nodded and pointed, saying they’d seen the signs over by the pier. They assured me they’d pack up everything before they left. I wonder if they thought I was beach patrol. Teehee! 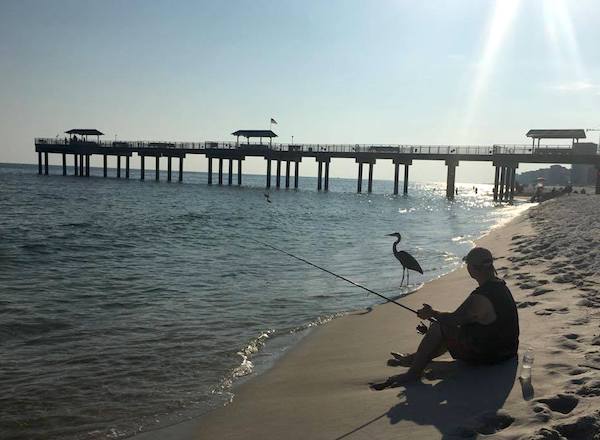 In the parking deck, an enthusiastic surfer asked if I was having a great day, and then looked around and asked where my family was. I told him I was there to write about Leave Only Footprints and asked if he had heard about it. He said he saw the flags and that he always cleans up his stuff. He’d never litter, “it’s bad for surfing.” He did think it was “really cool” that Gulf Shores and Orange Beach are working so hard to protect the turtles, too.

In my conversations, I quickly realized that people are aware of the Leave Only Footprints campaign, but only know a little about it. Kind of like me before I got there!

So, what is Leave Only Footprints?

The purpose of Leave Only Footprints is to raise awareness and participation in green initiatives and encourage “leave no trace” behaviors by visitors and residents in Gulf Shores and Orange Beach.

Efforts for this program began in 2007, coordinating city, state, business and individual efforts and resources to protect Alabama’s beaches. The message to “leave no trace” (aka, don’t litter) has definitely been heard. The many garbage cans and recycling bins placed on the beach make it easy to clean up before going home. But, there’s more to the initiative. 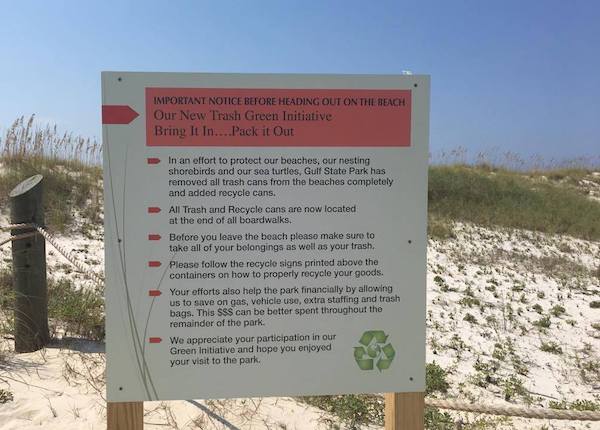 When residents and guests work together to keep Alabama’s beaches clean and healthy, this beautiful resource will be around for generations to come. 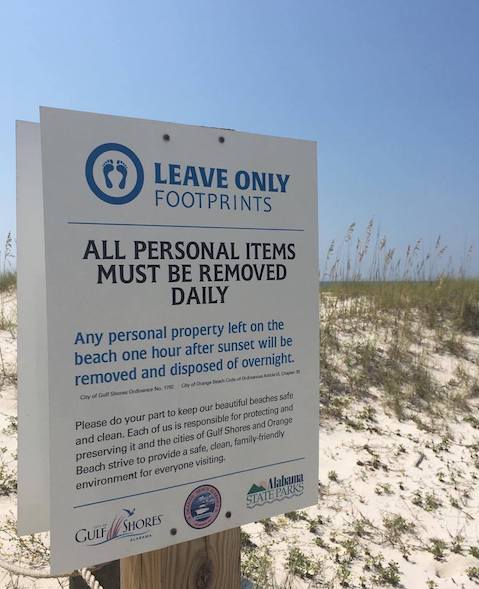 Other ways you can help

Small choices every day make a big difference in reducing your overall carbon footprint — whether at home or at the beach. The Leave Only Footprints initiative challenges you to implement these simple “green” practices into your life. 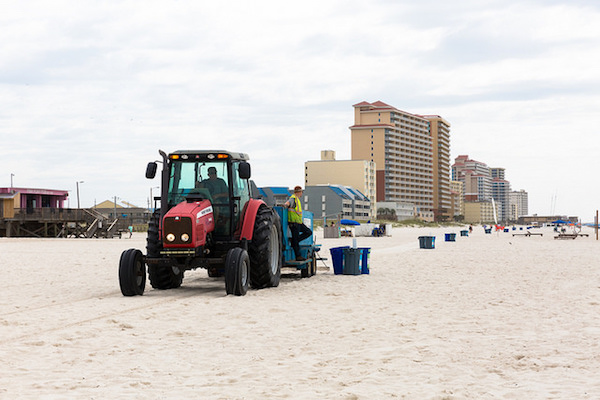 A key component of the Leave Only Footprints initiative is the beach clean up done each evening. An hour after sunset, beach patrols drive up and down Alabama’s beaches to pick up everything beach goers leave behind each day. So, if you leave that umbrella on the beach, it won’t be there in the morning.

For a hassle free beach vacation, these tips will help: 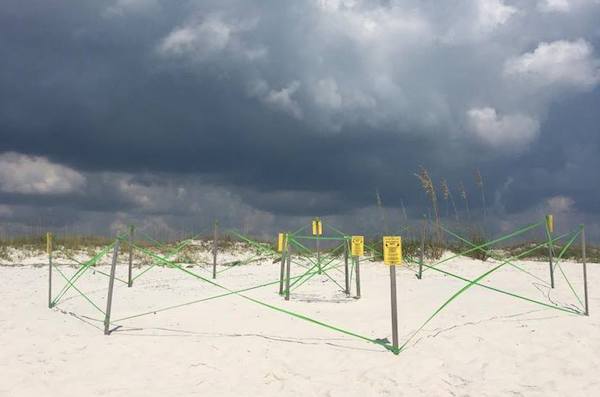 Leave Only Footprints has been a success! In 2014, only 80 sea turtle nests were found on the beach. Last year, volunteers counted a record 237 sea turtle nests. But that’s just one measure — something tourists might not notice.

And that’s when it dawned on me… One of the reasons I love visiting Gulf Shores and Orange Beach is precisely because the beaches are uncluttered. I can walk barefoot. I can always find a quiet stretch of sand. And I realized that while I really didn’t know about the Leave Only Footprints before, I had enjoyed its success!

The Leave Only Footprints initiative is a success because of the partnership between local businesses, hotels and condominiums, the local government, the visitors’ bureau, Gulf State Park and guests who visit the beach each day!

To learn more about Leave Only Footprints, visit their website.